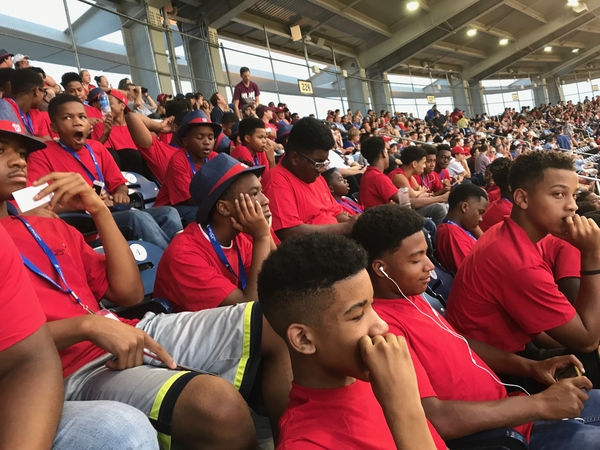 The 13th Man will hold its annual Charity Golf Tournament at the Country Club at Woodmore on September 25 to support the annual Summer Classic weekend enrichment camp as well as year-long tutoring and life-enhancing mentoring programs.

LANDOVER, MD, September 18, 2017 /24-7PressRelease/ — The Third Annual 13th Man Summer Classic, held at the Greenbelt Marriott this past July, provided a catalyst to help transform the lives of more than 70 young participants.

“The energy throughout the weekend was palpable,” said 13th Man founder and CEO E. Davon Kelly. “The shift in perspective went from boys who came because ‘their mother made them do it,’ to the same boys asking, ‘When can we do this again?’ A few of the participants’ mothers said they observed the shift that occurred since dropping their sons off 72 hours ago.”

The winning combination? Leadership lessons and team sports. A former high school and college basketball star, Davon Kelly has also taught the value of sportsmanship as an assistant varsity basketball coach at Episcopal High School in Alexandria, VA, a position he’s held since 2003. Kelly asserts that for many young men, athletics is a forum that embraces their energy, raw talent and innate need to belong to and excel at something where they can succeed.

The Summer Classic combines team play through drills, games and sports with leadership lessons from a variety of speakers and panelists. “OG (Original Gangsters): Black Lives Matter” was one of this year’s new sessions. Civil rights leaders talked about Jim Crow laws and segregation as well as experiences in the Greensboro sit-ins. Program attendees, boys ages 12 through 17, then had an opportunity to ask questions. Through this living history lesson, speakers focused on the importance of education as “the great equalizer.” One of the panelists literally fought every day in elementary school; his message was fortitude against the odds.

Hallmark sessions of the Summer Classic include the Mentor Panel and Dinner. During this session, the young men ask business and civic leaders about their career, personal life lessons, and goals and later enjoy dinner and more targeted discussions with these mentors. Every evening ends with a session called Guy Talk. These sessions allow the young men to discuss a variety of topics that interest them from sports to having ‘father figures’ in their lives.

The 13th Man, started with Davon Kelly’s interest in exploring the question of legacy, offers tutoring and enrichment programs throughout the year. Kelly states, “We have begun to see the fruits of our labor. In February (2017), we took a group of 13th Man members to the Alfred Street Baptist Church Historically Black Colleges and University College Fair. One 13th Man member had three onsite college admission interviews and was accepted at all three schools. He is now a freshman at Virginia Union University.”

Following the success of the Prince George’s County-based nonprofit organization, Kelly expanded the 13th Man to open a chapter in Charlotte, North Carolina this past April. The 13th Man will hold its primary fundraiser, an annual Charity Golf Tournament, at the Country Club at Woodmore on September 25. Sponsorship opportunities and registration are available. For more information about how you can support these life-enhancing mentoring and enrichment programs, please visit the website, or contact the 13th Man office at (301) 429-8807.

The award-winning My Barber’s Lounge was opened in Greenbelt in 2012 and Forestville in 2013. The Barbershops were the recipients of the 2013 Best of Gazette newspaper’s award, Steve Harvey’s Neighborhood Award for Best Barbershop in 2014 and the 2016 Greenbelt Small Business Excellence Award. Salon DK opened in March in Bowie, Maryland.

The 13th Man is also supported by Davon Kelly’s inspiring book From Courtside to the Boardroom: A Legacy in the Making.